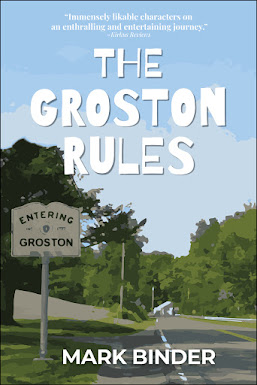 Jewish storyteller Mark Binder has just released his debut Young Adult Novel, THE GROSTON RULES
It’s the story of seven friends trying to graduate high school, who get caught up with bullying, climate change, and other dysfunctions…THE GROSTON RULES is an edgy book with suspenseful twists and turns. t is a captivating and lighthearted tale about teens in trouble, surviving through their strong friendships. Adults, young adults and mature teens won’t be able to put it down, because the story is as much about teen survival and unschooling as it is a young adult coming of age tale, rife with dark humor, teen comedy, fuck ups, and the occasional raunchy teen story. It’s a fast paced laugh out loud book that teenagers will actually read – a naughty high school teen comedy that you can’t put down. Please buy your copies today! https://linktr.ee/groston
Posted by JSC NEWS VIEWS AND SHMOOZE at 7:26 AM

Peninnah informs us today that Professor Haya Bar-Itzhak has died. She had been a protege of Dov Noy - and following his tenure at the IFA, she became its Director for about 25 years. She is also the co-author of "The Power of a Tale". May her name be a blessing! Read below for details.

H-Judaic is deeply saddened to learn of the passing of Prof. Haya Bar-Itzhak (1946-2020), an eminent folklorist and  emeritus chair of Hebrew and Comparative Literature at the University of Haifa.
Shulamith Z. Berger kindly passed along this news along with the following necrology prepared by Simon Bronner:

It is with a heavy heart that I share the news that eminent folklorist Haya Bar-Itzhak died October 25 at her home in Haifa, Israel. She was born in Berlin, Germany, on August 17, 1946 to Polish Holocaust survivors. After emigration to Israel, she received her bachelor's and master's degrees from the University of Haifa and finished her Ph.D. in 1987 at Hebrew University of Jerusalem with a dissertation on "The 'Saints' Legend' as a Genre in Jewish Folk Literature" under the supervision of Professor Dov Noy. She returned to the University of Haifa as a professor and in 1992, became chair of the Department of Hebrew and Comparative Literature and in 1994, head of folklore studies and  the Israel Folktale Archives. She also held visiting professorships at Indiana University, University of Michigan, Penn State University, University of Pennsylvania, and the University of California, Berkeley. In addition, she was a fellow of the Simon Dubnow Institute in Leipzig.

Among her honors is selection as an International Fellow of the American Folklore Society, Lerner Foundation for Yiddish Culture Award, and National Jewish Book Award (for Jewish Poland--Legends of Origin). In 2020, her students, colleagues, and admirers presented her with a bilingual festschrift in her honor Masoret Haya, edited by Tsafi Sebba-Elran, Haya Milo, and Idit Pintel-Ginsberg (Pardes Publishing, 2020).

Posted by JSC NEWS VIEWS AND SHMOOZE at 2:22 PM

In 1955, Pro­fes­sor Dov Noy resist­ed the push for a homo­ge­neous new Israeli soci­ety that would down­play the tra­di­tions of immi­grants from the Dias­po­ra. With a team of his folk­lore stu­dents, he began col­lect­ing and pre­serv­ing sto­ries from new­com­ers and long­time res­i­dent Israelis under the aegis of the Muse­um of Eth­nol­o­gy and Folk­lore. Today, the Israel Folk­lore Archives, hold­ing 24,000 tales in Hebrew, con­tin­ues its work as part of the Uni­ver­si­ty of Haifa. Haya Bar-Itzhak, the long­time direc­tor, along with coor­di­na­tor and researcher Idit Pin­tel-Gins­berg, cel­e­brat­ed the fifti­eth anniver­sary of the many nar­ra­tive voic­es in the archive with the pub­li­ca­tion of The Pow­er of a Tale in Hebrew in 2008. Now in 2020, shep­herd­ed by Pro­fes­sor Dan Ben-Amos, comes the Eng­lish trans­la­tion of that jubilee collection.

With voic­es of fifty-one nar­ra­tors from twen­ty-five eth­nic groups, forty-one tran­scribers, and thir­ty-eight schol­ars from Israel and the Unit­ed States, The Pow­er of a Tale toasts the founder of the IFA and hon­ors his mem­o­ry. The book does not have one par­tic­u­lar audi­ence in mind, and not every entry or con­ver­sa­tion may offer indi­vid­ual insight or allure, but there is some­thing here for every­one—folk­lorists, anthro­pol­o­gists, sto­ry­tellers, aca­d­e­mics, psy­chol­o­gists, his­to­ri­ans, rab­bis, lit­er­ary and cul­tur­al appreciators.

Reflect­ing the breadth of the col­lec­tion, the open­ing tale from Lithua­nia about a young woman who escapes mar­riage to a demon is fol­lowed by a set of three short leg­ends from Iraqi, Pol­ish, and Israeli Sephar­di cul­tures about sacred stones in and from the West­ern Wall. In a sur­pris­ing Druze tale, the gift fish deliv­ered by a fisherman’s daugh­ter spits tar at the queen; the sheikh advis­es her to tell the king that if the fish is forced to say why, the queen will be sor­ry. In oth­er con­tri­bu­tions, read­ers will dis­cov­er con­trast­ing views on how the vil­lage of Tarshi­ha was named, how the fly­ing camel became a sym­bol for the inter­na­tion­al Lev­ant trade fair of the 1920s and ​’30s, and a sym­pa­thet­ic sto­ry of the baby who became the leg­endary Carpathi­an Moun­tain rob­ber Dobush.

Nar­ra­tives arrive from many voic­es and range from four-sen­tence, out­line-like prose to pro­fes­sion­al­ly shaped, ready-to-share tales. Some of them may be known to read­ers: the Ethiopi­an woman who seeks the hair from a lion’s mus­tache in order to improve her rela­tion­ship with her hus­band; a bro­ken oath made by a woman res­cued from a well and wit­nessed by a weasel; and the tri­umph of a rid­dle-solv­ing daugh­ter over the stub­born arro­gance of her hus­band, the king. But most will be new to Eng­lish read­ers. Oth­ers, like the Moroc­can ver­sion of Rapun­zel, demon­strate how sto­ries jump across cultures.

Myr­i­ad approach­es to com­men­tary abound in the essays. These include Esther Scheely-Newman’s fem­i­nist analy­sis of the pos­i­tive female pro­tag­o­nist in ​“Mother’s Gift Is Bet­ter Than Father’s Gift” and Penin­nah Schram’s dis­cus­sion of the place of rid­dles in Jew­ish oral tra­di­tion in ​“The King and the Old Wood­cut­ter.” Oth­er schol­ars have ana­lyzed the tales they chose by their deep struc­ture and psy­chic impli­ca­tions. Many explain cus­toms, geo­graph­i­cal locales, and sto­ry sources. Some read more smooth­ly in Eng­lish than oth­ers. Exten­sive bib­li­ogra­phies and notes sup­port their interpretations.

Sharon Elswit, author of The Jew­ish Sto­ry Find­er, now resides in San Fran­cis­co, where she has been help­ing stu­dents vis­it­ing 826 Valen­cia loca­tions around the city to write sto­ries and poems and get­ting adults up and retelling Jew­ish folk­tales to share with their own spin.

Recommend this book to your library
The Power of a Tale
Stories from the Israel Folktale Archives
Edited by Haya Bar-Itzhak and Idit Pintel-Ginsberg
Subjects: Jewish Studies, Jewish Life and Tradition, Folklore
Series: Raphael Patai Series in Jewish Folklore and Anthropology

Here is the link to ORDERING this NEW IFA Book:
https://www.indiebound.org/book/9780814342084?aff=wsupress
Also available on Amazon
Posted by JSC NEWS VIEWS AND SHMOOZE at 11:33 AM