Light Publications is pleased to announce the release of Mark Binder latest book, THE MISADVENTURES OF RABBI KIBBITZ AND MRS. CHAIPUL.
It is a brief novel for adults, with no politics, and a lot of smiles*. She owns the restaurant. He’s the wise old rabbi. At their age what could possibly go wrong?
*It’s like rye bread… you don’t need to be Jewish to enjoy it.
As you may know, Mark is a well known and prolific Jewish author and storyteller.
Mark’s audiobook, LOKI RAGNAROK was nominated for an Audie Award for Original Work. In 2016, he won a Parents’ Choice Gold Award for Audio Storytelling. His collection, A CHANUKAH PRESENT was a finalist for the National Jewish Book Award for Family Literature.
THE MISADVENTURES is already receiving wonderful notices:
“Village stories that deftly lift a curtain on a world of friendly humor and touching details of Jewish life.”
– Kirkus Reviews
“The Lethal Latkes is not a murder mystery. It concerns some awful-tasting latkes (potato pancakes) and what you might call another Hanukkah miracle: love.”
– The New York Times
“The Wise Men of Chelm reimagined… Mark Binder’s ‘The Misadventures of Rabbi Kibbitz and Mrs. Chaipul’ will almost certainly make you laugh and might even cause you to shed a tear.”
– Jewish Rhode Island
THE MISADVENTURES… is available in print, ebook and audiobook anywhere these are sold, and of course on Amazon  at https://geni.us/Widm
Posted by JSC NEWS VIEWS AND SHMOOZE at 2:12 PM 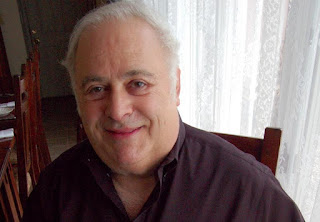 Howard Schwartz, the noted poet, essayist, novelist, editor, and expert on Jewish folklore and mythology, has been chosen as the recipient of the 2019 Tradition of Literary Excellence Award. The award, which was created in 2014 and is funded by the Municipal Commission on Arts & Letters of University City, is given “to honor the work of a living local author whose literary achievement has won  national and international acclaim.”
Schwartz will receive the award at 7 p.m. Saturday, Oct. 26, at the Tradition of Literary Excellence Award ceremony, held on the fifth floor of University City’s city hall, 6801 Delmar Blvd.
Previous recipients of the award have included William Gass, Jane O. Wayne, Patricia McKissack, Michael Castro and Gerald Early.
Schwartz, who was born and raised in University City, is Professor Emeritus at the University of Missouri-St. Louis. He is a three-time winner of the National Jewish Book Award and the editor of four collections of Jewish folklore. He is also the author of “Tree of Souls: The Mythology of Judaism” (Oxford University Press, 2004), which won the National Jewish Book Award in 2005. He is also the editor of 10 acclaimed children’s books, including “Next Year in Jerusalem” and “The Day the Rabbi Disappeared,” both of which won the National Jewish Book Award and the Aesop Prize in 1994 and 2000, respectively.
His most recent book is “A Palace of Pearls: The Stories of Rabbi Nachman of Bratslav” (Oxford University Press, 2018).
Tickets to the Oct. 26 event are $20/person; $35/couple, which covers light refreshments and live music. To reserve tickets, visit: http://bit.ly/Schwartz-Award. For more details about the event, contact Winnie Sullivan at penultim@swbell.net or 314-447-3888.

Posted by JSC NEWS VIEWS AND SHMOOZE at 10:40 AM