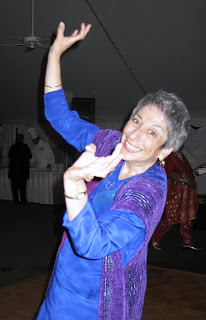 to be featured at the
2013 Jewish Cultural Festival
in Berlin, Germany this August

The Minstrel and the Storyteller is a delightful collaboration between Gerard Edery and Peninnah Schram that honors the rich and vibrant oral traditions of the Jewish people. For the last 20 years they have presented this entertaining, humorous and evocative program to audiences worldwide. The stories and songs, drawn from Ashkenazi and Sephardic sources, feature kings, queens, sages, tricksters and prophets. Their subtle interplay of narrative and music elevate both art forms to new heights in their unforgettable performances. Peninnah and Gerard have recorded a CD together, The Minstrel and the Storyteller (Sefarad Records).

The Jewish Cultural Festival with many events will take place August 15-25, 2013.
As The Minstrel and the Storyteller they will be presenting two programs. The first one will be on Saturday evening August 17th with Arabic Storyteller Maha Alusi. The second program on Sunday evening August 18th will be presented at the magnificent Conservative  Synagoge Rykestrasse
For more information, click on:
http://www.visitberlin.de/en/event/08-25-2013/27-juedische-kulturtage-2013-jewish-culture-days
Posted by JSC NEWS VIEWS AND SHMOOZE at 3:25 PM