Robin Bady! For those in NYC in Feb/Mar: check it OUT! 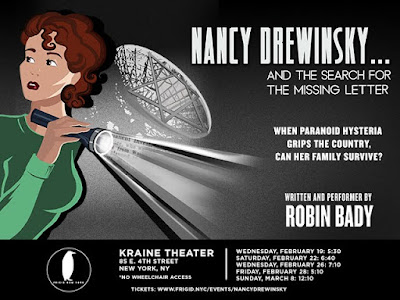 In 1960, 9-year-old Robin Bady wrote a pitch letter to FBI Director J. Edgar Hoover detailing her qualifications as the next Eliot Ness.

The pint-size Untouchable got a reply from Hoover himself that shot down her aspirations faster than you could say. “G-Man.”

"As you already know, only men can be Special Agents,” Hoover wrote back. “But women can be clerks or secretaries.”

But here’s where the mystery deepens. Unbeknownst to young Bady, for two and a half years, the FBI—under the aegis of Hoover—had been terrorizing her father, Isidore Bady, when Sen. Joseph McCarthy branded him—along with more than 40 other Jewish scientists working for the Army Signal Corps at Ft. Monmouth—as a Communist spy.

This was in 1953, a scant few months after Julius Rosenberg, who had worked at Ft. Monmouth, and and his wife Ethel Rosenberg were executed for a similar crime.

Now, Bady is unraveling the mystery of what happened to her father, why it happened, and how the fall-out lingered over her family ... while she seeks a mysteriously missing letter that informed her father that he was, finally, exonerated from all charges.

Nancy Drewinsky is one daughter’s fearless investigation into her family's past in order to make sense of the present. Bady’s account of that not that-long-ago time is deeply personal, uniquely compelling, and in this era of "witch hunts" and anti-Semitism rings an uneasy bell of recognition today.