From Our Portland Oregon Colleagues!


Hello JSC community,
I am delighted to be one of three featured tellers for this weekend's event:

Tell It Like It Is: Portland’s Jewish Storytelling Festival

Shaarie Torah is pleased to host Tell It Like It Is: Portland’s Jewish Storytelling Festival this upcoming May 2 & 3 with featured Storytellers: Maggid Cassandra Sagan, Sacred Storyteller Brian Rohr and Musician/Teller Eric Stern of Vagabond Opera.  The Jewish Federation of Portland is co-sponsoring.

This Festival will bring together classical and maggid-style storytelling, The Moth-style personal narrative with Emcee Boaz Frankel, storytelling workshops for those who want to learn the art, and even events for kids with Devorah Spilman. The Festival culminates in a performance by the magnificent Bohemian cabaret ensemble Vagabond Opera.
More information at: www.shaarietorah.org/storyfest

Thanks and many blessings, 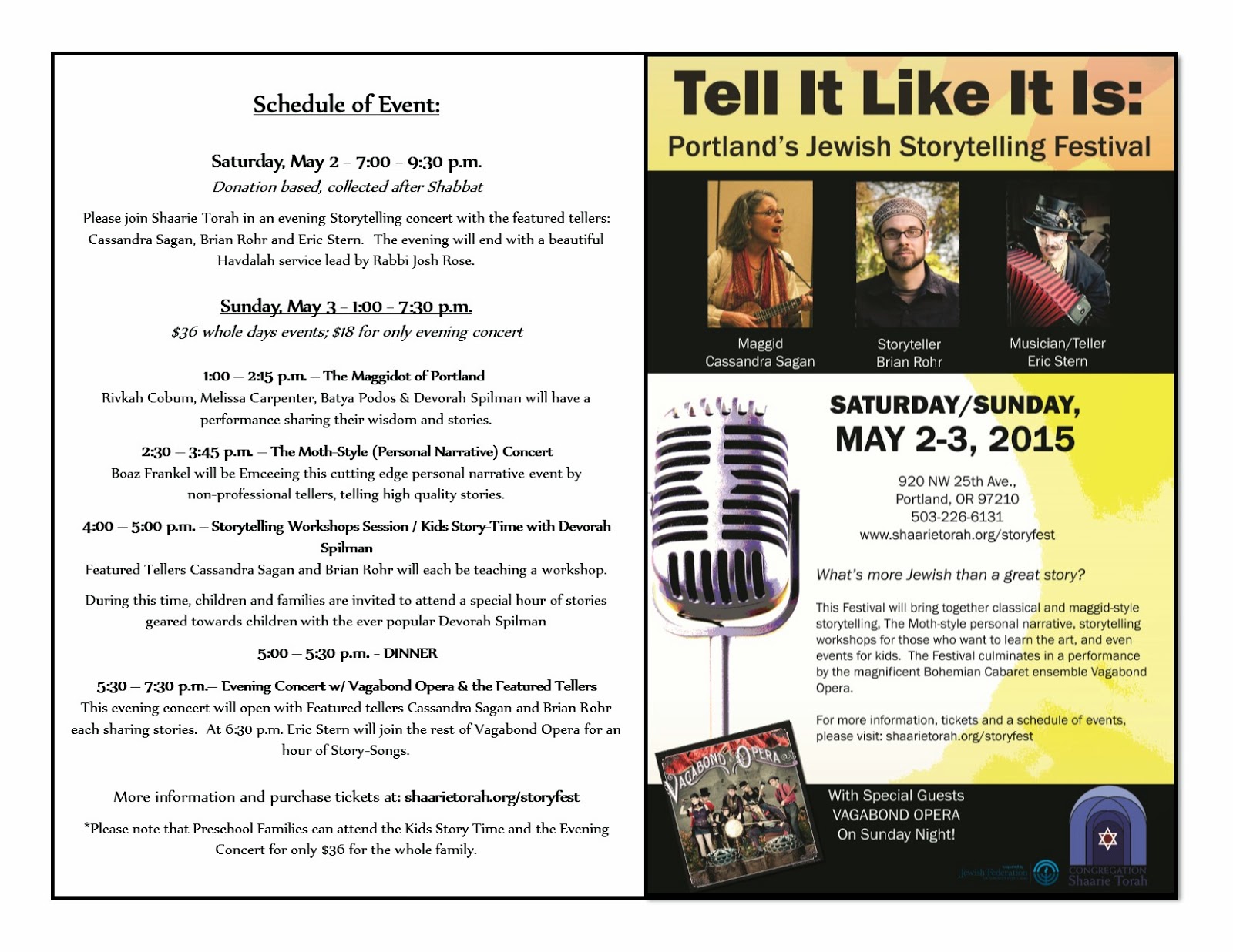 Posted by JSC NEWS VIEWS AND SHMOOZE at 4:08 PM

Invitation to anyone interested in the upcoming institute at East
Tennessee State University.

DATES: July 6-10, 2015
“Traditional stories are as relevant today as they have ever been: they are
humanity's most supple, sophisticated and incisive resources for uniting the
heart, mind, and senses.”
ABOUT SHONALEIGH: Shonaleigh Cumbers is a drut’syla, her grandmother’s
term for a traditional Jewish storyteller. The essence of this traditional
way of learning is to place the stories in an intricately woven imaginative
landscape in which all of the stories coexist and reinforce one another. With
over four thousand stories in her head, Shonaleigh has mastered the entire
drut'syla repertoire. By the age of 14 she had to know the Rabbinical cycles,
the Babylonian cycles, and a wide range of Yiddish and Hasidic story cycles.
This workshop offers a unique opportunity to study the basis for such
traditional learning and insight, starting with the Five Midrash, a series of
exercises in myth, imagination, and creativity. This five-day Institute is
the first of its kind on drut’syla storytelling methods in the United
States--an opportunity not to be missed. Please join us at East Tennessee
State University as we explore these ancient landscapes of traditional Jewish
storytelling.”
For more info contact: ETSU Storytelling - Storytel@etsu.edu - 423.439.7863
Posted by JSC NEWS VIEWS AND SHMOOZE at 9:10 AM

This article about Peninnah Schram appeared on April 15, 2015 in the Stern College/YU student newspaper The Observer: 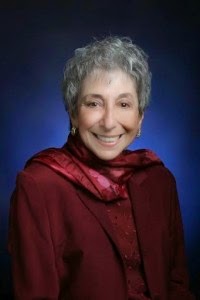 
This article about Peninnah Schram appeared on April 15, 2015 in the Stern College/YU student newspaper The Observer:

By SHALVA GINSPARG • Published: APRIL 13, 2015
Peninnah Schram, professor of Speech and Drama at SCW for over four decades, retired this fall. Schram first joined the Speech and Drama department in 1969. In the intervening years, she created and taught the first Jewish Storytelling course, published twelve books of Jewish folktales, and was nationally recognized for her work in storytelling. With new projects on the horizon, including a book on Jewish love stories, Schram says that she looks forward to many more “new and fascinating adventures” as she prepares to embark on this next chapter in her life.

“How this interview came about is a miracle story of an Elijah the Prophet opening a door for me,” Schram says, “but that’s a story for another time.”

Over the decades-long career that followed, Schram says that she was “blessed with so many highlights.” One that stands out to her was when Dean Mirsky asked her to teach a course in Jewish Storytelling in the mid-70s.
“It was the first such course ever taught in any college,” Schram says. “One of my students in that class – Rachayl Eckstein Davis – has remained in my life as a dear friend and we co-authored a book three years ago (The Apple Tree’s Discovery).”

Another highlight for Schram was when she took her History of Theatre class to see the off-Broadway one-woman play Hannah Senesh.

“In that class was Amy Gordon Guterson,” recalls Schram. “As we were leaving the theatre, I turned to Amy and said ‘This is your role!’ A few years later, she starred in this play at a special performance at Stern College. She was brilliant in that role, as I knew she would be!”

Stern’s first theatre major, Guterson says she found in Schram “someone who melded the Jewish world and the creative world with such a can-do spirit.” It was a model that paved the way for Guterson’s own career in the Jewish creative arts.

After graduating from Stern, Guterson went on to study at the Herbert Berghof Studio with Uta Hagen and then studied with Mike Nichols (the director) and improv specialist Paul Sills at the New Actors Workshop. She has since founded Kol Isha, a women’s theatre company in Pittsburgh, as well as the post-high school Jewish arts seminary, Tzohar Seminary for Chassidus and the Arts, also in Pittsburgh.

Today, Guterson and Schram are still in close contact. “She’s been one of the great mentors of my life,” Guterson says about Schram. “People have different mentors at different stages of their lives, but Peninnah’s stayed with me. She’s a friend, and at this point, a family member.”

Among the specific life skills Guterson says that she gained from Schram is a “yes and” attitude. “In improvisation,” Guterson explains, “you always want a ‘yes and’ feeling—‘yes and…here’s something else I can give you’—as opposed to a ‘no but!’ That’s the creative spirit in essence and that is what Peninnah embodied.”

Guterson also credits Schram with teaching her the importance of focus. Guterson recalls that Schram would often say, and illustrate through example, that “the way to get a lot of things done is to focus on what you’re doing in the moment.”

Not only do Schram’s students testify to her role as a mentor, but so too do her colleagues within the Speech department. Professor Reuven Russell, current professor of Speech and Drama, expresses his gratitude at having had the opportunity to be mentored by Schram.

“I’m teaching 9 years now and my class is really modeled after her and her class,” he says. “She is a terrific storyteller and a wonderful teacher and she will be missed by me and by a lot of people.”

Reflecting on her retirement, Schram says that there is much that she will miss about Stern.

“I’ll miss the ‘ritual’ of leaving my office twice a week during each semester and walk to my classroom,” she says. “As I enter into the classroom, I’ll miss seeing the faces of my students. I’ll miss meeting new students and helping them overcome their fears of public speaking and, in turn, inspiring more self-confidence to utilize this valuable and much-needed art and skill in their personal and professional lives. I’ll miss seeing the changes and improvements during the semester.”

Though she says she has a lot of “mixed emotions at the thought of retirement,” she also has many projects on the horizon. She is co-authoring a book on Jewish love stories which will include love stories from the Tanakh, from folktales, historical love letters and contemporary personal stories. She is also on the faculty of the new Jewish Spiritual Education Maggid-training project and is continuing to teach and perform Jewish folktales at synagogues and conferences. For example, this past February, she was a featured presenter at LimmudNY.

Schram also looks forward to having more time to be a grandmother. “Of course, it goes without saying,” Schram says, “that retiring from YU will also mean that I can visit Israel more often – or for longer times – to visit my daughter and her husband and their 3 sabra children who live there. I can also spend more time with my son and his wife and their son who live in the NY area.”

Adds Schram, “I have many blessings in my life and, as long as I will have my health, I plan to continue as a storyteller and educator.”

Reflecting on Professor Schram’s speech class in a recent email, one of her students wrote, “You gave us encouragement, you gave us confidence. You taught us about life. I will forever cherish those days in class with you and will always carry the lessons you taught us.”

Echoing these sentiments, Dean Bacon recently commended her long-time colleague for a career marked by excellence and commitment.

“Professor Schram,” said Bacon, “took good speakers and helped them get better. She enabled those who did not think they had a public voice to find that voice. With a gentle hand but with steely determination she made sure that each Stern College woman who entered her class would leave with new skills and with enhanced confidence.”
Concluded Bacon, “as a guide and teacher she was the best, and as a consummate storyteller she has created a marvelous legacy.”
Posted by JSC NEWS VIEWS AND SHMOOZE at 7:21 PM